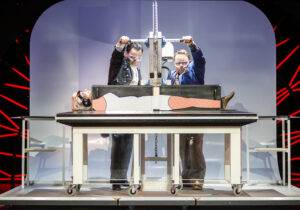 Created with magic legends Penn & Teller, Magic Goes Wrong is Mischief’s biggest and most daring comedy catastrophe to date. Magic Goes Wrong follows a hapless gang of magicians as they stage an evening of grand illusion to raise cash for charity. As the magic turns to mayhem, accidents spiral out of control and so does their fundraising target!
Magic Goes Wrong will be playing at Milton Keynes Theatre until Saturday 23 October.
Review.
I think there must be something wrong with me.
Magic that Goes Wrong had all the makings of a very enjoyable night at the theatre. Lots of expensive illusions, a mind reader that couldn’t and Blade – a danger man who did himself more injury than a one-legged high-wire act!
My first problem (which didn’t seem to affect anyone else in the audience) was that once you realise that the main premise is so simple – the fact that each trick goes wrong is no surprise and hardly funny.
I found that I wasn’t being convinced that we had a band of amateur magicians that couldn’t quite do it. Like it’s predecessor The Play That Goes Wrong, I saw a series of carefully set up and carefully rehearsed mistakes. I wondered at one point if some of the cast members were just not experienced enough to carry it off. They were doing all the right moves but not quite getting the laughs.
Don’t get me wrong, as far as I could see the rest of the audience loved it – especially those given to “Whooping” at every opportunity!
Therefore it must’ve been just me that found it a bit flat with perfectly good comedy situations that didn’t quite strike home.
Ernie Almond

Magic Goes Wrong will be playing at Milton Keynes Theatre until Saturday 23 October.