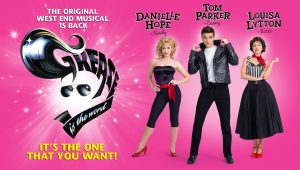 Since opening on Broadway in 1972 and the smash hit movie starring John Travolta and Olivia Netown-John, Grease’s place has been firmly established in the cultural Hall of Fame, having seduced the hearts of millions with its back-to-back sizzling tunes. It’s the original high-school musical featuring everyone’s favourite characters – Sandy, Danny, the groovy T Birds, the sassy Pink Ladies and the whole gang at Rydell High – and all the unforgettable songs from the hit movie including You’re The One That I Want, Grease Is The Word, Summer Nights, Hopelessly Devoted to You, Sandy, Greased Lightnin’ and many more. 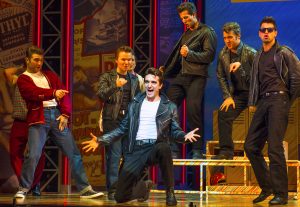 Voted the “No 1 Greatest Musical”*, Grease has proved that a musical love story, bursting with denim, cheerleaders, slick hairstyles, rock’n’roll, 1950’s pop culture and an irresistible mix of teenage angst and young romance is timeless and universal. 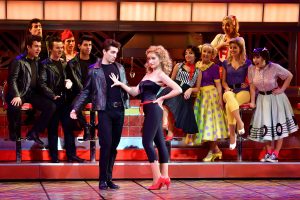 This award-winning production originally opened in the West End in 1993 where it enjoyed a hugely successful run of 6 years. The show has since toured throughout the world playing to sell-out audiences and breaking box office records everywhere, having been seen by over 12 million people in the UK alone.

Grease is at Milton Keynes Theatre from 28th August until Saturday 2nd September.

A packed house on Monday greeted this show with huge enthusiasm. There were very many young people in the audience and it did cross my mind that they might miss many of the references back to the 1950 Rock ‘N’ Roll culture. But if they did it didn’t show! They cheered until they were hoarse, clappped and sang along to every number! There was even a lady member of the press near me singing along with the solo numbers which I found a bit off putting!

The story line as described above was as close to the film as you could expect and the sets and costumes were sparkling, spectacular and exactly right. I particularly liked the band led by Griff Johnson surveying all from above and helping no end to set a great atmosphere even during the overture (if I dare use that word about a rock ‘n roll show!).

The choreography I wasn’t quite so sure about even though it was staged by our top lady Arlene Phillips. It was a bit stylised  and as I’m old enough to have lived through this era it seemed a little like a collection of the ‘special’ moves of the time as against normal jiving that the teenagers would have done. But this is theatre, so I assume we need spectacle more than realism.

The cast are very strong in fact a couple of them I got the feeling could easily have played the two leads off the stage! Danielle Hope as Sandy gave us as close to Olivia Newton John as we could expect and just was the teenager all the young girls in the audience wanted to be. Somehow she also managed to scrunch her fine head of dark hair into a succession of uncomfortable looking blonde wigs!

Wanted fans will have loved Tom Parker’s debut in Musical Theatre and I expect it will have earned him lots of brownie points even though I felt he could have been stronger. Having to do a Brooklyn (?) accent made several of the cast a bit difficult to understand at times, I wondered at the time if it might be as well to compromise on the accent for a British tour?

All in all, this show truly sparkles and if you can get a ticket I’d take a bet that you’ll be dancing, cheering and clapping along with the rest at the finale! Get a ticket if you can!

Grease is at Milton Keynes Theatre from 28th August until  Saturday 2nd September.