An eccentric but endearing comedy, the show tells the story of a hilarious Spelling Bee though a unique mixture of musical numbers, improvisation and audience participation. Six high-schoolers face their fears, dreams and angst in a bid to gain a slot in the National Spelling Bee. Overseen by adults who are seemingly stuck in adolescence themselves, the result is a bawdy journey about competition and growing up. It manages to strike the perfect balance between being surreal, realistic and touching. 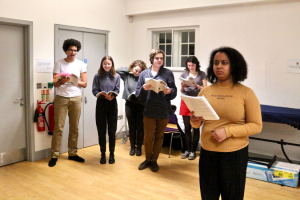 Director, Leo Béar, was drawn to taking on the musical due to its particular combination of eccentricities syas “It combines the best parts of musical theatre, from catchy songs and well-explored characters to fantastic punchlines and a story you actually want to see through to the end.” Uncommonly, Spelling Bee also involves ad lib and audience participation. Realising that this is something he never “imagined working with in theatre”, Béar promises that these techniques add an entirely “special something” to the show; no two performances will be exactly the same.

Refreshing, bold and wistful, The 25th Annual Putnam County Spelling Bee is a musical that stands out against the crowd – and gets the crowd involved.

The 25th Annual Putnam County Spelling Bee, is at the Cripps Auditorium, in Magdalene College, Cambridge from 13th – 17th February.