The much-anticipated return of Matthew Bourne’s “CINDERELLA” is at  Milton Keynes Theatre from 13th – 17th February. 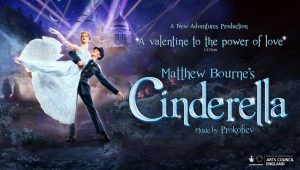 Matthew Bourne said: “Cinderella is one of my most heartfelt works and a personal favourite amongst my re-imagined classic stories. I’m delighted to have brought together this cast of current star performers, experienced New Adventures veterans and exciting young talent. I’m thrilled to see another generation of Company dancers take on this beloved production”

Fresh from their triumph playing Victoria Page in “The Red Shoes”, the role of ‘Cinderella’ will be performed by Cordelia Braithwaite and Ashley Shaw. 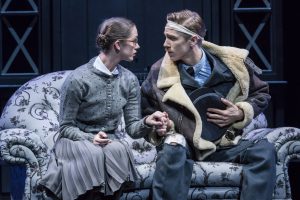 Cinderella’s heroic Pilot, ‘Harry’, will be performed by Will Bozier, Andrew Monaghan and Dominic North.

‘The Angel’ (Cinderella’s ‘Fairy GodFather’) will be danced by Paris Fitzpatrick and Liam Mower.

One of New Adventures’ most loved productions Matthew Bourne’s “CINDERELLA” is a thrilling and evocative love story, set in London during the Second World War. This interpretation of the classic fairy tale has, at its heart, a true war-time romance. A chance meeting results in a magical night for Cinderella and her dashing young RAF pilot, together just long enough to fall in love before being parted by the horrors of the Blitz.

With Lez Brotherston’s sumptuous costumes and sets, which won an Olivier Award for his original designs, and lighting by Olivier Award-winning Neil Austin, “CINDERELLA” will be performed in Surround Sound, designed by Paul Groothuis and features a specially commissioned recording played by a 60-piece orchestra.  Matthew Bourne’s vivid story telling has never been more heart-stopping and touching, and will take the audience into the heart of Prokofiev’s magnificent score, and the sights and sounds of war-torn London. 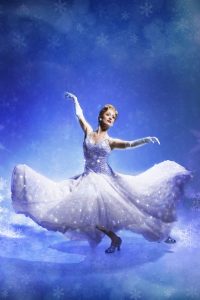 2017 marks 20 years since “CINDERELLA” first premiered in the West End and it concludes a year-long celebration of work to commemorate the 30th Anniversary of New Adventures.

“CINDERELLA” is at  Milton Keynes Theatre from 13 – 17th February.

I have been on, in and around theatre for getting on for three score years and ten and have learned a bit, but I wouldn’t presume to know enough to criticize Matthew Bourne production. The man is – and I don’t ever remember using this term in print before – a genius! All I can do is to describe what I saw and try to persuade you to go and witness Cinderella at the MK Theatre this week.

Prokofiev,s wonderful music was used in the original Bolshoi production of Cinderella in 1946 and the well know Frederick Ashton version in London. But who apart from Matthew Bourne, would come up with the idea of using the same score, but setting the whole thing in London during the blitz? He says that it was when he heard the Prokofiev sat and wrote the piece during the Second World War that set him thinking.

Well, it worked! This is certainly different, the story is used magnificently, but the usual “handsome prince” is a wartime pilot suffering from the after effects of a crash. Every member of the cast is a separate character that we get to know as the story unfolds.

There are Step sisters, a pretty nasty stepmother as you might expect but watch out for Angel danced brilliantly on the night we were there by Paris Fitzpatrick. No standard ballet positions here, twists, turns and occasionally contortions the like of which you might see on a solo dancer on BGT and did I notice a little nod towards moon walking?

We see ARP Wardens, spivs, prostitutes and rent boys. The surround sound is wonderful for the recording of the 60 piece orchestra – and it certainly helps as the bombs begin to drop!

I’ve been careful not to give too much away, but believe me this is a new treatment that works perfectly and is mesmerising to watch. A far cry from Sir Frederick Ashton, but I’ve a strong feeling that he would love it!

Get a ticket if you can!

“CINDERELLA” is at  Milton Keynes Theatre from 13 – 17th February.