“Where Will You Stand When The Flood Comes?” Parade, the heart-wrenching true story of injustice racism and love is at the Sharnbrook Mill Theatre from 16th – 21st November. 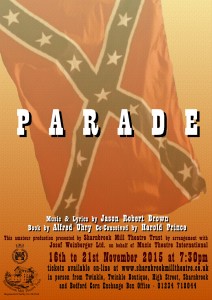 Exactly 100 years ago, the story behind PARADE was headline news around the world. Was it the century’s most notorious crime, or the century’s greatest injustice?

Leo Frank, a Jewish factory owner living in Atlanta, Georgia was wrongfully convicted of the rape and murder of his 13 year old employee.

’Parade’ deals with the South’s propensity in the early 20th Century for handing out rough justice to its black population. From the haunting opening number, a rich, tuneful score underpins a poignant narrative that exposes the bigotry, fear and hypocrisy in the Southern states of the USA. 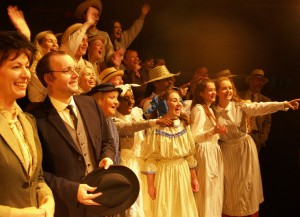 From the Award Winning Sharnbrook Mill Theatre Trust comes this multi-award winning musical that perfectly couples soaring music with the harsh reality of its drama.

Today the controversy behind the story continues….Who will you side with? Or in the words of one one of the lead characters “Where Will You Stand When The Flood Comes?”