The songs written for Broadway and the West End of the 1920s and 30s are acknowledged to be some of the greatest ever written. Join the ten musicians and glamorous female vocalist of Michael Law’s Piccadilly Dance Orchestra at The Radlett Centre on Sunday 28th April at 7.30pm for an unashamed wallow in this wonderful music! 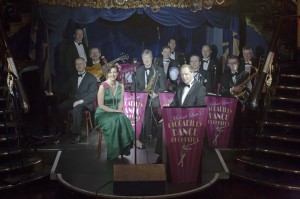 You’re The Top is a de-lovely cocktail of great songs by Cole Porter, Irving Berlin, The Gershwin brothers, Noel Coward and friends.

With his cool, urbane manner and mellifluous baritone voice, Michael Law croons while the audience swoons to the sounds that bring to life the elegant, jazz and swing flavoured “Art Deco” era. The Orchestra has been in demand wherever style and swinging music are required. Highlights have included several BAFTA Awards parties including special evenings for Julie Andrews and Sean Connery, West End Theatre first night parties, and Earl Spencer’s 30th Birthday Party, where Princess Diana asked Michael and the orchestra to play “In The Mood” twice!.