Hailed as one of the best musicals of all time,  BLOOD BROTHERS has triumphed across the globe, with four awards for Best Musical in London and seven Tony Award nominations on Broadway.

BLOOD BROTHERS tells the captivating and moving story of twin boys separated at birth, only to be reunited by a twist of fate and a mother’s haunting secret. The memorable score includesA Bright New Day, Marilyn Monroe and the hit Tell Me It’s Not True. 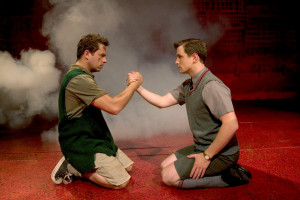 When Mrs Johnstone, a young mother, is deserted by her husband and left to her own devices to provide for seven hungry children she takes a job as a housekeeper in order to make ends meet. It is not long before her brittle world crashes around her when she discovers herself to be pregnant yet again – this time with twins! In a moment of weakness and desperation, she enters a secret pact with her employer which leads inexorably to the show’s shattering climax. A sensational cast, incredible show stopping music, remarkable staging and five star performances make

WILLY RUSSELL’s BLOOD BROTHERS is at The Watford Colosseum from 31st March until 5th April.