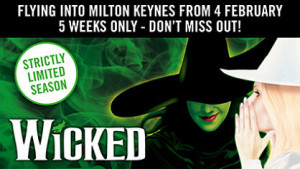 WICKED, the global musical phenomenon that tells the incredible untold story of the Witches of Oz, will be opening its UK tour at the Milton Keynes Theatre. The strictly limited 5-week season will run from Tuesday 4 February 2014 until Saturday 8 March 2014.

Acclaimed as “one of the most popular West End musicals ever” (Evening Standard), the record-breaking London production continues its open-ended run at the Apollo Victoria Theatre

The original Broadway production remains “Broadway’s biggest blockbuster” (The New York Times) where it is now in its 10th Anniversary year. The West End production is now in its 7th year at London’s ApolloVictoriaTheatre, where it has been seen by almost 5 million people.

Based on the acclaimed novel by Gregory Maguire that re-imagined the stories and characters created by L. Frank Baum in ‘The Wonderful Wizard of Oz’, Wicked tells the incredible untold story of an unlikely but profound friendship between two girls who first meet as sorcery students. Their extraordinary adventures in Oz will ultimately see them fulfil their destinies as Glinda The Good and the Wicked Witch of the West. 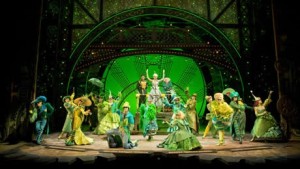 Demand is expected to be high, so early booking is advisable!