The highly successful 5 week run of Wicked comes to an end this week after a remarkable run at the Milton Keynes Theatre. 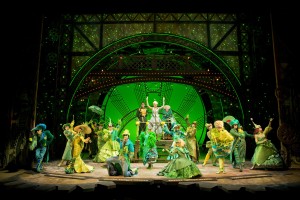 Wicked, the global musical phenomenon that tells the incredible untold story of the Witches of Oz has flown in to Milton Keynes Theatre until 08 March.

Recently acclaimed as “one of the most popular West End musicals ever” (London Evening Standard), the record-breaking London production continues its open-ended run at the Apollo Victoria Theatre where it is already the 16th longest-running musical in West End theatre history.

Based on the novel by Gregory Maguire that ingeniously and wittily re-imagines the stories and characters created by L. Frank Baum in The Wonderful Wizard of Oz, Wicked tells the incredible untold story of an unlikely but profound friendship between two sorcery students. Their extraordinary adventures in Oz will ultimately see them fulfil their destinies as Glinda The Good and the Wicked Witch of the West. 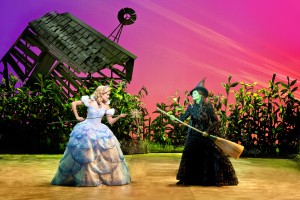 Wicked, packed with thrilling technical wizardry, stunning costumes and show-stopping songs is an unforgettable experience for audiences of all ages.

Wicked has music and lyrics by multi GRAMMY® and Academy Award® winner Stephen Schwartz, a book by Winnie Holzman, musical staging by Wayne Cilento and is directed by two-time Tony Award® winner and Olivier Award nominee Joe Mantello. Wicked is based on the acclaimed novel, ‘Wicked: The Life and Times of the Wicked Witch of the West’, by Gregory Maguire. 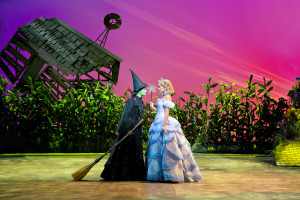 The night I went the young Wicked fans whooped and cheered and had a wonderful time. The show does have lots of humour (mainly from Glinda) fabulous costumes and some brilliant sets. Although I’m not sure that the shadowgraph version of the demise of Elphaba works too well, with one of the monkeys having to pull a curtain across the stage first, and I remember thinking when I saw the original London production that the pace of the second half drags due mainly to some interminably long songs, I notice they still seem to last a wet week!

Verdict: Some fine performances, the Wicked fans will love every second!

Note: Our reviewer Judi Herman was also in the audience but is currently a bit under the weather, but she’ll be giving us her verdict as soon as she can. Get well soon Judi!

Wicked is at the Milton Keynes Theatre until 8th March