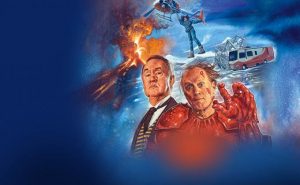 This new comedy is written by and co-stars Adrian Edmondson and Nigel Planer.

Gary Savage (Adrian Edmondson) and Hugh Delavois (Nigel Planer) were students at RADA together. Now in their sixties, they meet in an Icelandic wasteland, on the set of a fantasy movie “Vulcan 7”.

Hugh has had a plodding career but has landed the role of Vulcan’s butler – a small but regular role – and he’s making his seventh film for the franchise.

Gary is a has been Hollywood A-lister who has fallen on lean times and is playing a guest monster with four hours in make-up and one word in the script.

Sparks fly inside the trailer as old wounds are opened and outside the trailer things are not going to plan either: the director’s gone AWOL, the catering trucks on the wrong side of a ravine, and the volcanic activity is growing more lively by the minute…

The cast is complete when Lois Chimimba appears as the movie runner who referees the constant tension between the two actors.

Mike Moore of Black Cat 107 in St Neots went along to see the opening night at Cambridge and these were his thoughts:

The show is hilarious and fans of Ade and Nigel will not be disappointed, the characters are totally believable and once the tension and history between them is established that takes the background as the drama of what is to become of them stranded in this caravan perched on the side of a ravine – the opposite side to the catering trucks – takes over.

This is a must see, if you enjoy the work of either of its stars you will have a brilliant night of theatre. But please note there is an age guidance of 14+ which could also apply to maiden aunts as the language does get a bit colourful at times! .