The Rotary Club of Luton North’s annual Charity Concert brings to the region the world renowned Treorchy Male Choir, regarded by Sir Anthony Hopkins as the Master Choir of them all. 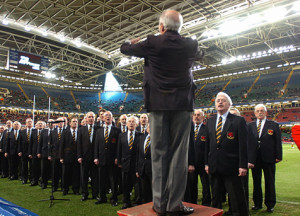 For 130   years the Treorchy Male Choir has been recognised as one of the greatest choral ensembles of all time. Early competition victories were followed by regular radio and television broadcasts, feature films and an unequalled number of commercial recordings. The Choir has given several Royal Command Performances, appeared alongside very many international entertainers and undertaken an enviable number of  tours to Canada, USA, New Zealand and Australia. Come along to The Grove Theatre in Dunstable and enjoy the opportunity to discover more about this legendary Welsh musical institution – and don’t forget that they always keep the warmest of welcomes in the hillsides!

The Charities supported by Rotary this year include Noah Enterprises, Keech Hospice Care, and Shelterbox. The concert solo spots will be taken by Luton Youth Cantores.which was formed in 2006 from the senior girls in Luton Youth Choir, directed by Kerry Watson. The choir has grown from only 12 girls in 2006 to over 30 now. A happy evening of song is promised with humour from the resident Treorchy Choir compere, Dean Powell.  The guest conductor for the evening will be the experienced Dr Haydn James. For 30 years, he was Musical Director of The London Welsh Male Voice Choir, and has appeared at most of the UK’s major concert halls.

They are rarely in this area and this ‘one-off’ special event starts at 7.00pm on Saturday 28 September at the Grove Theatre, Dunstable, Box Office: 01582 60 20 80 or Online: www.grovetheatre.co.uk.