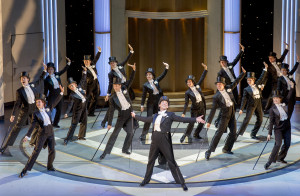 Direct from its tremendous success in the West End, winning three Olivier Awards, for ‘Best New Musical’, ‘Best Choreography’, ‘Best Costume Design’ and winner of the Evening Standard Award for ‘Best Night Out’,  the spectacular Top Hat is returning to The Milton Keynes Theatre stage after its hugely popular 2011 debut  – 26 Aug – 06 Sept. 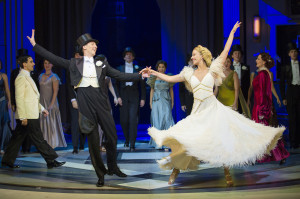 Stepping into the shoes of Fred Astaire and Ginger Rogers in the lead roles of Jerry Travers and Dale Tremont, are Alan Burkitt and Charlotte Gooch, who both return to Top Hat having previously performed these roles in the West End. They are joined by Clive Hayward who returns as Horace Hardwick, the role he played in the West End, Rebecca Thornhill as Madge Hardwick, Sebastien Torkia as Alberto Beddini and John Conroy as Horace’s valet Bates.

Jerry Travers (Alan Burkitt), the famous American tap dancer, arrives in London to appear in his first West End show. Travers meets the irresistible Dale Tremont (Charlotte Gooch), the girl of his dreams, and follows her across Europe in an attempt to win her heart. 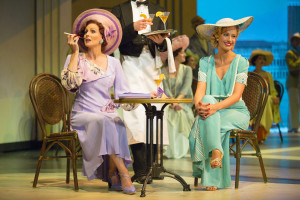 Performed by a cast of 29 and accompanied by 11 live musicians, this multi award-winning musical comedy includes Irving Berlin classics from the movie such as Cheek to Cheek, Isn’t It a Lovely Day to be Caught in the Rain and Top Hat, White Tie and Tails.  In addition, from Berlin’s 1200 strong back catalogue, a further ten numbers have been interpolated including well-loved favourites Let’s Face the Music and Dance and Puttin’ On the Ritz.

Alan Burkitt started his career winning the All England Tap Dancer of the Year award. A member of the original West End cast of Top Hat at the Aldwych Theatre, Burkitt understudied the lead role of Jerry Travers for both Tom Chambers and Gavin Lee. He received rave reviews when he stood in for Lee on press night, a success story documented by Channel 4 for the TV series The Sound of Musicals. Other recent stage credits include: Singin’ in the Rain, Andy Lee in 42nd Street (Chichester Festival Theatre), the Prince in Adam Cooper’s Shall We Dance (Sadler’s Wells), Cats (German Tour) and We Will Rock You (Dominion Theatre).

Charlotte Gooch took over the lead role of Dale Tremont from Summer Strallen in the West End, performing alongside Tom Chambers as Jerry Travers. Gooch performed the lead role of Penny Johnson in Dirty Dancing in the West End at the Piccadilly Theatre and also in the original national tour. Other recent stage credits include: the lead role of Sandy in Grease (UK Tour), Cats (German Tour) and the workshop of Swing Time, dancing a duet with Anton du Beke.

Spectacular and unbelievably precise tap dancing, fabulous sets and lighting plus Irving Berlin’s music and lyrics go to make this uplifting and hilarious romantic comedy celebrating 1930’s style and romance a night in the theatre you wont forget for a very long time!