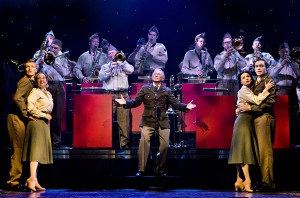 His music defined an era; his disappearance stunned the world…

In December 1944 a little single-engine aircraft carrying the world famous big band leader, Glenn Miller, vanished somewhere between North Bedfordshire and Paris. Did the plane crash? Was it shot down? Will the mystery of its disappearance ever be solved?

In this new musical, there won’t be any startling revelations about the whereabouts of Major Miller who, even after almost 71 years, is still classed as ‘Missing in Action’, but there will be a chance to see the UK’s greatest ever song and dance man, Tommy Steele, re-introduce all the great Glenn Miller tunes performed by a 16 piece orchestra with a full supporting company of singers, actors and dancers.

The Glenn Miller Story (as it’s never been told before) comes from director Bob Tomson and producer Bill Kenwright, the creative team who brought you Blood Brothers, Evita and Jesus Christ Superstar; choreography is by Olivier Award winner, Bill Deamer.

For some years Bill Kenwright had been looking for another chance to work with his long-time idol Tommy Steele. It was when they discovered that the movie adaptation of Glenn Miller’s story was a particular favourite of them both that the idea for this show was born.

Tommy Steele was Britain’s original rock n’ roll star landing his first UK No.1 with Singing the Blues in January 1957. His career highlights include more than 20 hit singles, twelve successful movies and countless award-winning stage musicals. Which might lead the curious to wonder how it is that music legend Tommy Steele, a lively 79 year old, is playing a man who disappeared from the face of the earth aged just 40?

Well, those lucky enough to get tickets for the show at The Milton Keynes Theatre will find that out! Maybe it’s all part of the ongoing Miller mystery…

The Glenn Miller Story is at Milton Keynes Theatre from 26th until 31st October.

There’s absolutely no doubt that Tommy Steele has still got what it takes to carry a full scale musical – and easily control a packed house at MK Theatre with just the blink of an eye!

This version of The Glenn Miller Story has been staged by Bill Kenwright purely as a vehicle for Tommy. The music of Glenn Miller is faithfully re-created by a first class 16 piece orchestra led by Andrew Corcoran, the costumes of the period are great – as are the dancers and singers wearing them. Special mention I think should go to Sarah Soetaert playing Glenn’s wife Helen Burger. With the most interesting singing voice that I could listen to again and again, Sarah supported Tommy’s Glenn perfectly.

The story could have been a little more dramatic at the end after we see Glenn Miller walk from the hangar at Twinwoods in Bedfordshire for that final fated journey to Paris. 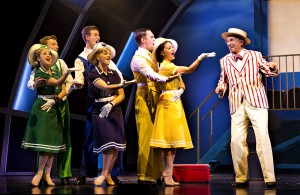 There is absolutely no doubt that Tommy Steele still has the “Pazaz” that made him a star all those years ago, but I was left wondering if this was quite the right show to take on at the ripe old age of 79? His voice is still exactly the same as we remember in Half a Sixpence or any of his records going right back to Rock with the Caveman, but as with many of us “over 35’s” his movements were those of someone considerably older than Glenn Miller was when he died. Don’t let my thought put you off however – this is a show that will please the Miller aficionado’s and enthral the Steele fans!

I would love to see Tommy narrating his own life story – if they could find someone brave enough to play Tommy with the man himself onstage! Tommy Steele still has such a lot to give theatre audiences – I’m just not sure that this was the perfect vehicle.

The Glenn Miller Story is at Milton Keynes Theatre from 26th until 31st October.