Direct from London’s West End and based on the classic comedy film starring Sir Michael Caine and Steve Martin, Dirty Rotten Scoundrels will transport you to the French Riviera (ooh-la-la!) where two seasoned swindlers attempt to hoodwink a millionaire heiress. As the two compete for her affections (and her money), they discover there is only room for one of them. Which will it be? 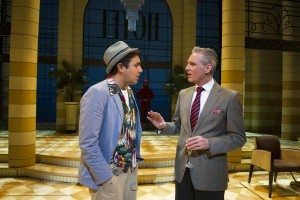 Michael Praed (TV: Robin of Sherwood and Dynasty, stage: Captain Von Trapp in The Sound of Music), stars as sophisticated conman, Lawrence.
Noel Sullivan (member of Hear’Say, TV: Gavin and Stacey, stage: We Will Rock You and Priscilla, Queen of the Desert) is the larger-than-life upstart hustler, Freddy.
The rich, beautiful and not so dumb blonde soap heiress, Christine, is played by Carley Stenson (Steph in TV’s Hollyoaks, and Legally Blonde, Spamalot and Shrek on the West End stage ).
Gary Wilmot  a familiar face on the West End stage starring in productions ranging from Chitty Chitty Bang Bang to Oklahoma to The Pajama Game. On TV, he’s a regular on Never Mind the Buzzcocks and host of Showstoppers. Gary originally played Andre in Dirty Rotten Scoundrels in the West End and is delighted to be rediscovering the fun of the role back here at Milton Keynes Theatre.
Dirty Rotten Scoundrels, directed and choreographed by Jerry Mitchell, won the award for Best New Musical of 2014.  Jerry’s latest Tony Award winning Broadway hit, Kinky Boots, has just opened in London.
Bring on the glitz and glamour of the French Riviera, bring on the wit and laugh-out-loud antics of the cream of British con artistes. Add to the mix all the warmth of the golden age of the classic musical and what have you got? Dirty Rotten Scoundrels, that’s what!
Dirty Rotten Scoundrels is at Milton Keynes Theatre from Sept. 22 – 26.