The world’s official No.1 Eagles tribute, The Illegal Eagles, return to The Core at Corby Cube on Saturday 30 April with another outstanding performance promising more of their tight harmonies, acute attention to detail and incredible showmanship. 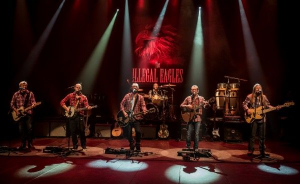 With over 15 years international touring experience, the band continues to amaze crowds everywhere and their ability to recreate the distinctive sound of The Eagles, with both flare and impressive authenticity, has won them mass acclaim on an international level.

The show features all the classics hits from The Eagles’ amazing career including Hotel California, Take It Easy, Lyin’ Eyes, Desperado, Life in the Fast Lane, Take it to the Limit, and many more.

This latest production also features a touching tribute to the late Glenn Frey, one of the founding members of the original Eagles, tracing his personal input to the band as well as showcasing some of his own solo material.