Were you a fan of Dusty Springfield’s early recordings with The Springfields? Well there’s an all too rare chance to re-live all the original songs, using all of the original musical arrangements this week at The Stables in Wavendon.

Alongside Dusty and Tom Springfield, Mike Hurst was one of the original Springfields. They were the first British vocal group to have a top 20 American hit in 1962 and the top group in the UK in 1961 and 1962/3, as voted for by readers of New Musical Express. (The Beatles were Best Newcomers that year…).

The Springfields were internationally famous with hits around the world. Their final performance in October 1963 was on ITV’s Sunday Night At The Palladium, watched by an estimated audience of 20 million. 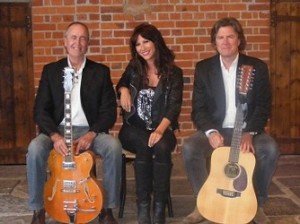 Now catch the re-formed Springfields: Mike Hurst, Marina Berry, and Andy Marlow and see them perform the hits you remember… they have 80 to choose from!

Click on this to see the reformed Springfields recording, the sound is as close to the original recordings as you’ll ever get!

The Springfields at The Stables, Wavendon this Thursday 4th July