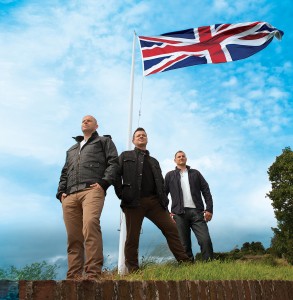 They created musical history by becoming the first group of serving, British soldiers to have two hit Top 5 and Top 10 albums and they’re are back at the stevenage venue on Saturday 9th February.

Their story sounds like a movie script written by Richard Curtis. It begins in the British Army, features a band of friends on a dream journey, takes in the world’s war zones, reality TV, hit albums raising monies for armed forces charities, performing for Her Majesty the Queen and on prime time TV’s and boasts a feel good soundtrack you would leave the cinema singing. Except this tall tale is true.

The Soldiers, Sergeant Major Gary Chilton from The Band of the Army Air Corps, Staff Sergeant Richie Maddocks from the Corps of Army Music and Lance Corporal Ryan Idzi from 1st The Queen’s Dragoon Guards are on their new tour showcasing their latest, self-titled album featuring ballads and up-tempo classics including ‘Amazed’ (Lonestar), ‘Daniel’ (Elton John) and their tribute to the late Robin Gibb, with his favourite Bee Gees song, ‘How Deep Is Your Love’.

The Soldiers take to the Gordon Craig Main Hall stage on Saturday 9th February at 8.00pm.