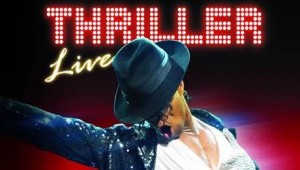 Direct from London’s West End, Thriller Live is a spectacular concert created to celebrate the career of the world’s greatest entertainer. It is a visual, audio and electrifying journey through the magic of Michael Jackson’s 45 year musical history. Over two hours of non-stop hits from pop to rock, soul to disco as the cast play homage to Jackson’s legendary live performances and innovative dance moves executed with flair, precision and passion, this is a show that you will never forget.

The special visual effects perfectly set the scene for the various phases of Jackson’s career. The cast and dancers deliver with amazing accuracy the songs moves and the mood of those decades. I must mention the terrific live band under the direction of Mike Lindup – they were also so accurate in their interpretations of well over thirty songs going right back to the early Motown era that you might have been convinced you were listening to the original backing tracks. Cleverly though, the director/choreographer Gary Lloyd decided to make sure we knew they were all playing and singing live by bringing the band into the action.

There were one or two cast changes on the night we saw the show, but being called Understudy or Alternate in the programme notes gave quite the wrong impression! They were all without any doubt lead performers.

Ione Townsend has the perfect voice – and what a voice! – for the many songs required of the female lead in Thriller Live. If she was a little nervous in the first few minutes, she quickly stepped it up and gave a fine performance. Sean Christopher we were told was the lead dancer. Little did we know that towards the end of the show he IS Michael Jackson! All of the dancing was of a very high standard with some exceptionally innovative moves from Gary Lloyd with his choregrapher hat on.

The three male leads were Shaquille Hemmans, now there’s a stage personality if ever I saw one! Adam J Bernard, who knew that Dan Strongman in Holby City had such a voice! Stepping up the ranks and coping well was Tyrone Lee, having worked with many of our top current male vocalists is rappidly making a name for himself.

The audience were standing, dancing, clapping and cheering long before the spectacular finale. In fact, a friend of mine that goes to the theatre as often as I do remarked “That was the show of the year for me!”

So, if you’d like to see a show that’s spectacularly well staged, where the five leads are brilliant and where the singers, dancers and band all give 110%, then don’t miss Thriller Live at the Milton Keynes Theatre this week!