The Rat Pack is at The Waterside Theatre, Aylesbury on Saturday 25th January 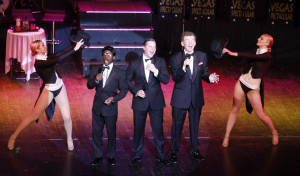 Its fun all the way as the “Purveyors of Cool” swing into  High Wycombe and Aylesbury with a sensational show featuring the greatest music of the 20th century.

Wonderful memories of Frank Sinatra, Dean Martin & Sammy Davis Junior in a fabulous production that continues to be successful all over the world.

The great news is – it’s all totally live and every song is an absolute classic – Come Fly With Me, Under My Skin, Mr Bojangles, Lady Is A Tramp, That’s Amore, Mack The Knife plus many more of your favourites. The lucky actors that get to sing these show-stopping songs are Wayne Kennedy, playing Dean Martin,  Roman Marek who plays Frank Sinatra and Jim Whitley as Sammy ‘Davies’ Jnr.

With an abundance of class & style they take you on a trip back in time to vintage Las Vegas; hip, cool and a with their timeless soiree that still remains the hottest party around.

The BBC summed up this show in just one word – MAGNIFICENT!

The Rat Pack at the Waterside Theatre, Aylesbury on Saturday 25th January.