The hit of Broadway & The West End is coming to Watersmeet this November 19th – 22nd when, to celebrate their 70th year, Rickmansworth Players are staging Mel Brooks’ hilarious comedy musical “The Producers” 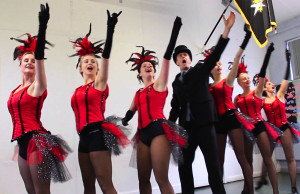 An award winning smash hit both on Broadway and in London’s West End, The Producers evokes the Golden Age of Musical Theatre but with a cheeky Mel Brooks twist!

In the show, faded Broadway producer Max Bialystock and his neurotic accountant Leopold Bloom hatch a cunning plot to get-rich-quick: stage the worst musical ever written, and when the show flops, escape to Rio with all the cash!

Along the way they enlist the help of some amorous grannies, a crazed Nazi, a blonde Swedish bombshell and a fabulously gay directorial team! But will their dastardly scheme go to plan?

Lyrical, outrageous, irreverent and hilarious, this is a guaranteed laugh-out-loud romp of a show, featuring some of the local area’s finest performers.

The starring role of Max Bialystock is played by Watford resident Steve Brown, who, although stepping out for the first time with  Rickmansworth Players, has been performing with amateur companies for exactly 20 years. “My favourite thing about this production is performing the brilliant material of Mel Brooks, having been a lifelong fan of his work, with a team of people who are all as enthusiastic about it as I am”, he says. 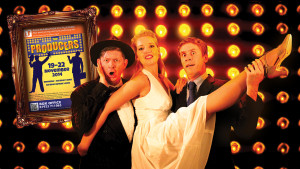 Taking on the role of feisty, swedish bombshell Ulla is Sandra Bell. Originally from Vienna, this gorgeous, tall blonde has come to the UK just to play this role. “I am delighted to have the opportunity to portray one of my all time dream roles. What I like most about The Producers is that despite being a “new” musical, it is really a homage to the classic Vaudeville shows and Broadway”.

Choreographer Dana Mistin danced professionally for 15 years, working with the likes of Des O’Connor and Tommy Cooper. This showgirl is now passing on her razzmatazz to the entire cast of The Producers.

And there’s plenty of tap in this show, as leading man Pete Gold (playing Leo Bloom) has discovered. “For me, learning to tap dance has been one of the highlights. This is a role I’ve been dying to play ever since I saw the stage show on its opening night in the West End ten years ago”.

The Producers is at Watersmeet, Rickmansworth from 19th – 22nd November

2 thoughts on ““The Producers” coming to Rickmansworth”