The legendary thriller The Mousetrap celebrates 60th anniversary with its first ever tour, coming to Northampton 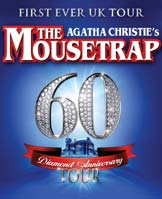 Agatha Christie’s classic thriller The Mousetrap is famous around the world for being the longest running show of any kind in the history of British theatre – and with almost 25,000 performances it’s a play to be proud of. To celebrate 60 incredible years on stage, it’s going on tour for the first time, with a star cast, and Northampton audiences can see it at Royal & Derngate, from Monday 18 to Saturday 23 March.

In her own inimitable style, Dame Agatha Christie has created an atmosphere of shuddering suspense and a brilliantly intricate plot where murder lurks around every corner.

The Mousetrap is on the Derngate stage from Monday 18 to Saturday 23 March with matinees on Wednesday and Saturday.