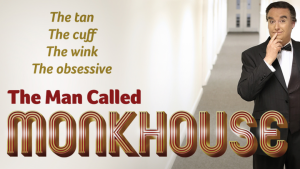 Bob Monkhouse was a comedian, writer, actor and TV personality consistently on British radio and TV screens for four decades.

Using film archive, atmospheric lighting and a clever soundscape, as well as authentic stand up material from Monkhouse himself, “The Man Called Monkhouse” is an hour long play featuring the extraordinary talent of Simon Cartwright as our eponymous hero.

Bob Monkhouse, was simultaneously voted Most Loved and Most Hated Entertainer in a 1978 TV poll. This piece looks at his life through a difficult childhood, via the vertiginous heights of television superstardom, the dent in his status during the ‘new wave’ comedy of the late ‘80s and finish with a re-born Bob, back on TV and finally feted as the comic genius he undoubtedly was.

Set in July 1995, we find Bob Monkhouse alone in his cramped study among thousands of show-business artefacts. With the realisation that two treasured joke books have been stolen, in his obsessively categorised world this is something of a disaster. To add to his woes, he has been asked to write a eulogy for his friend and script writing colleague, Denis Goodwin. An emotional task that whether he likes it or not, forces uneasy introspection.

Speaking aloud his thoughts, we eavesdrop on the writing duo’s time together in the ‘50s, ‘60s and beyond as they battled for a foothold in a burgeoning entertainment business.

In contrasting Denis’s life with his own, Bob tells his imaginary congregation as much about himself as he does his close friend, painting an intriguing picture of a glorious career stretching out long after Denis’s death, set against a difficult home life.

For every hilarious anecdote, there is also personal tragedy as we peek behind the impenetrable mask of this oh-so familiar public face.

Directed by Bob Golding, who won a Fringe First and was nominated for an Olivier Award for his own portrayal of Eric Morecambe.  adds: ‘There’s a lot of room for nostalgia and Edinburgh’s a good place to première a play like this.’

then The Court Theatre (Tring) on Friday 18th September

Having watched the first public performance of The Man Called Monkhouse I certainly got the feeling that here was a piece that is bound to grow and grow. Congratulations are due to writer actor Alex Lowe and director Bob Golding who have treated us to just a glimpse of the real Bob Monkhouse – with many of the blemishes not covered in an orange make-up! 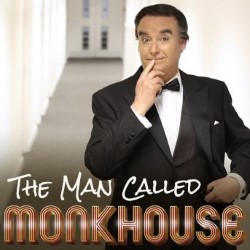 The look and the voice of actor Simon Cartwright are astoundingly accurate, and you’ll feel the goosebumps as you see Bob himself up on that stage. I’ve a strong sense that all that was missing was a couple of notches upwards of the Monkhouse energy and sparkle whilst he actually performed (to contrast slightly with Bob at home) but I’m equally certain this will come after a few performances at The Fringe!  Whilst I’m being really picky, I could have done without the conversation with the policeman investigating the loss of Bob’s files and substituted maybe a few moments of him  working the crowd as he did at Lakeside for instance.

Bob had tragedy in his life and quite purposely this is not dwelled upon. But how do you end a biographical piece about a man like Monkhouse when you’re only halfway through his life? With great difficulty I imagine!  Maybe one day soon Alex Lowe will pen a second act showing Bob’s bravery towards the end, continuing to make people laugh whilst at the same time dealing with prostrate cancer.

Having only seen the first ever public performance of this, I’m now sorry I cant be in Edinburgh to see every other performance and witness this fine play being honed. If you can, I promise you a piece of theatre you will remember for a very long time!