The Barn Theatre in Handside Lane, Welwyn Garden City are presenting The Ladykillers from 16-24 January. They describe this adaptation of the film as “Criminally funny, hilariously thrilling – the film classic adapted by the creator of Father Ted.” 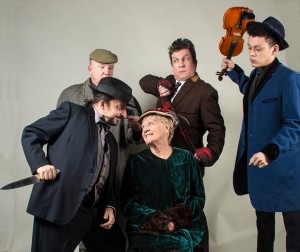 London, 1956, and despite the fog and grime old Mrs Wilberforce’s house in a seedy area near King’s Cross Station is the picture of cosy gentility. Apart, that is, from the crooked walls and wonky staircase, and the shuddering rumble of trains passing beneath its foundations. A shadow looms across the house. Someone is watching her. Is it a denizen of these murky streets? The door opens to reveal Professor Marcus, a self-proclaimed music enthusiast who wishes to rent rooms for rehearsals of his string quintet. Mrs Wilberforce is delighted, but doesn’t realise that it is all part of a brilliantly conceived plan to rob a train, and that she will soon be an innocent participant in their dastardly plot. The house becomes a battleground between the unsuspecting old lady, her parrot General Gordon, and the less than efficient forces of evil.

The Ladykillers is at The Barn Theatre, Welwyn Garden City from 16th – 24th January