Robin Hood and the Babes in the Wood is this year’s choice for The Grove Theatre in Dunstable.

The legendary Australian Soap actor Alan Fletcher, who plays Karl Kennedy in Neighbours, will headline as the Sheriff of Nottingham in The Grove Theatre, Dunstable this Christmas. This year, Alan will celebrate twenty years on the Australian soap, having joined the show in 1994. During that time he has also earned cult status across UK universities, where he regularly tours with his band Waiting Room. No stranger to pantomime, Alan has headlined in some of the biggest venues in the country, with roles including Hook in Peter Pan (Aberdeen), Abanazar in Aladdin (Malvern), Fleshcreep in Jack & The Beanstalk (St Albans) and most recently, the Sheriff of Nottingham in Robin Hood, at the Stag Theatre Sevenoaks for producers Magic Beans. 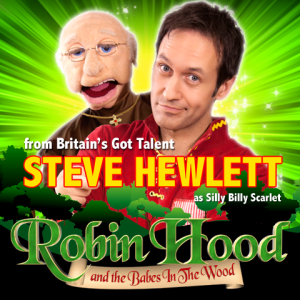 Joining Alan as Silly Billy Scarlet will be Steve Hewlett, the ventriloquist who shot to fame on ITV’s Britain’s Got Talent! Steve has performed in pantomime since the age of 22 and this year will be his ninth pantomime. Ventriloquists in pantomime are rare to see with only five appearing nationwide, but Steve says it is the love of the family atmosphere, both backstage and front of house, that keeps him coming back for more. ‘I have always had a passion for variety’ Steve says, ‘and love the fact that singers, comedians, actors, speciality acts and celebrities all get together to tell one story. It’s not Christmas unless your watching or performing in Pantomime.’

In previous years, along with his puppets, Steve has played a number of comic characters including The Chinese Policemen in Aladdin four times! As Silly Billy Scarlet, expect Steve to entertain you with his extra silly characters alongside him. ‘Silly Billy may have Arthur Lager with him or little ChiiChii, Naughty Pongo the Skunk or one of my Celebrity Dummies, there are endless surprises,’ says Steve.

Andy Abraham will be playing Little John, Andy shot to fame when he came second in the X Factor in 2005. He quickly earned a repletion as an extraordinary vocalist, with his rendition of songs like Me And Mrs Jones proving he is a naturally powerful soul singer. Since the X Factor, Andy Abraham has become a platinum selling recording artist, and has toured the country in the West End Musical Boogie Nights, as well as his own concert tour The History Of the Big Band .

The Fairy of the Forest is to be played by Anna Kumble, as 90’s pop star Lolly, Anna  received a BRIT Award nomination, and had a number of hits including Hey Mickey and Viva La Radio. On television, Anna also enjoyed a long stint as a children’s television presenter for both CBBC and Nickelodeon.

Robin Hood and the Babes in the Wood is at The Grove Theatre, Dunstable from 12th December – 4th January 2015