After a hugely successful first national tour in 2012 Pauline Quirke, Linda Robson and Lesley Joseph are back on stage in “The laugh a minute production” of Birds Of A Feather, which comes to the Derngate stage in Northampton from Tuesday 30 April to Saturday 4 May. 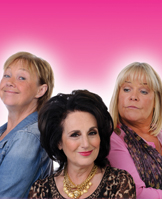 One of BBC TV’s most popular and fondly remembered sitcoms, Birds Of A Feather, ran for almost 10 years until 1998. Set in Chigwell, it chronicled the misadventures of Sharon Theodopolopoudos and Tracy Stubbs (Pauline Quirke and Linda Robson) and their man-eating neighbour, Dorien Green (Northampton’s own Lesley Joseph).

Pauline Quirke will most recently be remembered as Hazel Rhodes in ITV1’s Emmerdale. She is also well known for her portrayal of Olive Martin in the award-winning drama The Sculptress.

Linda Robson rose to prominence in Shine On Harvey Moon and also appeared in Harry’s Game and Play For Today amongst others before starring as Tracey in Birds Of A Feather for nine years.

Join Pauline, Linda and Lesley as they recreate their adored characters from Birds Of A Feather on stage in a show created especially for the theatre by The Comedy Theatre Company, producers of the highly successful tour of Victoria Wood’s dinnerladies and Keeping Up Appearances.