The Ghost Train by Arnold Ridley directed by David Lester is at The Queen Mother Theatre, Hitchin from 24th February until 4th March 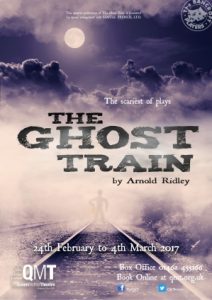 A disparate group of travellers are stranded at a remote country railway station late on a stormy night with no hope of reaching their destination that day. The stationmaster tells a story about a strange death on the line and of a Ghost Train. They dismiss the story and prepare to spend the night, but then strange things happen … This is an exciting and suspenseful thriller making its first appearance at the QMT on a set designed to give the audience a real chill! Not to be missed. Regularly nominated by critics, as one of the scariest plays performed in the theatre, this is Bancroft Players 400th public production.

Ghost Train is at the Queen Mother Theatre, Hitchin from 24th February until 4th March