A smash hit on Broadway and in the West End, award-winning comedy musical Avenue Q brings a host of fuzzy friends to Milton Keynes Theatre this week.

Featuring the naughtiest puppets in town, brought hilariously to life by an ensemble cast of 11 performers, Avenue Q is a Tony Award-winning musical about growing up, dreaming big, and finding your purpose in life. 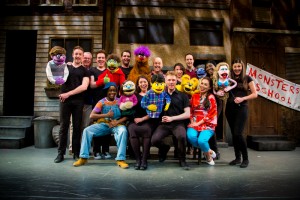 Meet Princeton, a bright-eyed graduate who comes to New York City with big dreams and a tiny bank account. Soon discovering that the only neighbourhood in his price range is Avenue Q, he finds himself moving in with some truly quirky characters. There’s Brian the out-of-work comedian and his therapist fiancée Christmas Eve; Nicky the good-hearted slacker and his closet gay Republican room mate Rod, an Internet ‘sexpert’ called Trekkie Monster and a very cute kindergarten teacher named Kate Monster. And would you believe the building’s superintendent is Gary Coleman?! Featuring hysterically funny songs including The Internet is for Porn and Everyone’s A Little Bit Racist, Avenue Q is a hilarious musical with a warm (and very fuzzy) heart.

Avenue Q is at Milton Keynes Theatre from 16th – 21st May

For some reason I got the impression that the puppets used in this production were not as big as those I saw in the West End version. I’m pretty sure that they were though – there’s a whole thriving business of hiring sets of Avenue Q puppets for out of town productions. I can only assume that the actors were more animated than the puppets because I found myself watching the puppeteers more often than the puppets, this has not happened before. I still think this is the cleverest and one of the funniest musicals, but I left the theatre feeling just a bit disappointed.