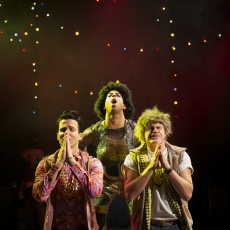 The Comedy of Errors is Shakespeare’s funniest and most farcical comedy. Two sets of estranged twins, separated at birth, find themselves in the same city 25 years later with hilarious consequences. A series of mistaken identities, assumed personas, and wild mishaps bring a family crisis – so complicated that time itself loses the plot – into heartwarming focus. Fortunately the audience is always one step ahead…
Pocket Comedy is a sixty minute version of Propeller’s acclaimed production of The Comedy of Errors which has been performed in theatres around the globe.

Under the direction of Edward Hall, Propeller is an all-male Shakespeare company that brings texts to vivid life with productions full of clarity, poetry, speed and imagination.

After the performance the actors invite questions and feedback from the audience, encouraging them to express their response to the work in the freest possible way.

Pocket Comedy provides a dynamic, contemporary and physical introduction not only to Shakespeare, but also to theatre of the highest possible standard.

“How to get your child hooked on Shakespeare.” – The Daily Telegraph
Suitable for 7 years plus. Running time 1 hour plus a 40 minute talkback

If you missed this production at The Place in Bedford, it is at the Luton Library Theatre during the Full House Feb Fest on 20th February at 2.30pm.

This event is part of Full House Feb Fest. in Luton. Other events include: