THE BAND opened at Manchester Opera House on 8 September 2017 to critical and public acclaim. 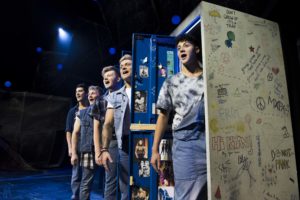 THE BAND is a new musical about what it’s like to grow up with a boyband. For five 16 year-old friends in 1992, ‘the band’ is everything. 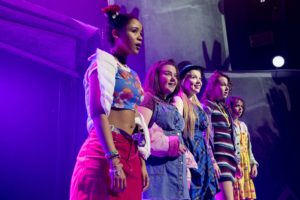 25 years on, we are reunited with the group of friends, now 40-something women, as they try once more to fulfil their dream of meeting their heroes. 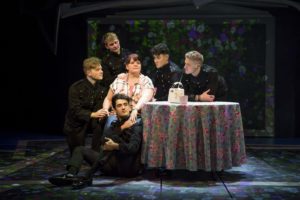 THE BAND is directed by Kim Gavin and Jack Ryder, designed by Jon Bausor and choreographed by Kim Gavin, with lighting design by Patrick Woodroffe, video design by Luke Halls and sound design by Terry Jardine and Nick Lidster. 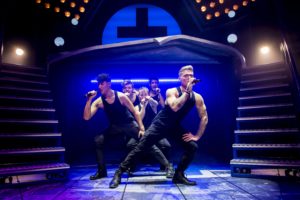 If I’m honest, I wasn’t over excited about seeing this show, but had I not bothered I would have missed a real treat! The Band is something new, very different to the usual run of pop musicals. The script is sharp and very witty, there is a story – yes a real story! The packed Milton Keynes Theatre laughed, clapped, cried, cheered and at the end got up and danced!

The sets work very well. The use of projection onto a conglomeration of different shaped screens was very effective, we even had a full sized passenger plane take off over our heads!

The comedy and the pathos in an altogether excellent script by Tim Firth, were handled very well by an excellent cast led by Rachel Lumberg and Alison Fitzjohn. After a fairly low key start with just the younger girls, the arrival of Alison Fitzjohn as the grown up Claire is a theatrical experience you won’t forget!

The winners of BBC’s programme to find the band itself can be more than proud of themselves as the sang and danced (and played a few other roles) dare I say as well as any boy band has ever done!

An excellent night out. It’s not a tribute to Take That, it just uses their music. It is much, much more than an evening watching a tribute show. Go and see for yourselves – if you can get a ticket! 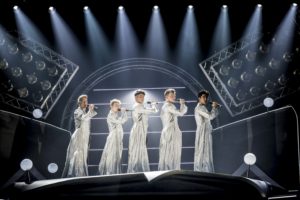