The Addams Family at the Milton Keynes Theatre until 28th October

Prepare to click your fingers as everyone’s favourite ghoulish clan, THE ADDAMS FAMILY, come to Milton Keynes Theatre Tuesday 24th – Saturday 28th October, as part of their UK & Ireland premiere. With book by Marshall Brickman and Rick Elice; music and lyrics by Andrew Lippa; and based on the characters created by Charles Addams, heads will roll… with laughter! 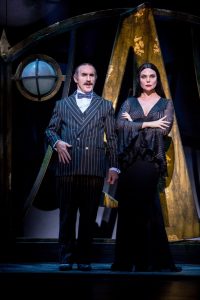 Wednesday Addams, the ultimate princess of darkness, has grown up and has a shocking secret that only Gomez knows; she’s fallen in love with a sweet, smart young man from a respectable family! Now, Gomez Addams must do something he’s never done before — keep a secret from his beloved wife, Morticia. Everything will change for the whole family on the fateful night they host a dinner for Wednesday’s “normal” boyfriend and his parents. All the usual clan are present – Uncle Fester, Lurch, Pugsley et al.

The UK & Ireland Tour will be directed by Matthew White, who recently directed She Loves Me at the Menier Chocolate Factory, where he also directed Candide, Sweet Charity (and West End) and Little Shop of Horrors (and West End). Choreography will be by Alistair David, whose recent theatre credits include Two Noble Kinsmen (Royal Shakespeare Company), Show Boat (Sheffield Crucible Theatre and New London Theatre) and Seven Brides for Seven Brothers (Regent’s Park Open Air Theatre). The production will be designed by Diego Pitarch, with musical supervision by Richard Beadle, lighting design by Ben Cracknell and musical direction by Andrew Hilton

. The Addams Family is at Milton Keynes Theatre until Saturday 28th October

Ernie Almond went along to see the show……

Halloween came early to Milton Keynes! The spooky, kookie family The Addams Family are here in full force! This comedy musical is sure to please any existing fans and collect very many more during the week. With wonderful performances by Samantha Womack and Cameron Blakely as Morticia & Gomez and Carrie Hope Fletcher as Wednesday Addams we were all set. Unfortunately Les Dennis was off on the night we went (we wish him better) and so Uncle Fester was in the very capable hands of Scott Paige. Rick Elice & Marshall Brickman’s book is witty, with plenty of adult but not offensive humour. Always nice to have real musicians in the pit and under the direction of Richard Beadle, they did credit to Andrew Lippa’s score. Half term, so the audience was generally younger than usual at MK, but they loved it – as did us old ‘uns!