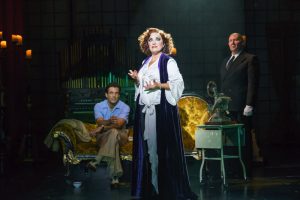 Last year, Ria Jones played the role of ‘Norma Desmond’ at the London Coliseum when Glenn Close was indisposed, receiving rave reviews and standing ovations for her performance. Ria has recently starred as ‘Dorothy Brock’ in 42nd Street at the Théâtre du Châtelet in Paris. Her West End credits include ‘Fantine’ in Les Misérables, ‘Grizabella’ in CATS and ‘Florence’ in Chess. Her touring credits include ‘Alex’ in The Witches of Eastwick, ‘Mrs Overall’ in Acorn Antiques – The Musical, ‘Reno Sweeney’ in Anything Goes and ‘The Narrator’ in Joseph and the Amazing Technicolor Dreamcoat. 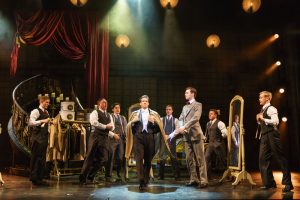 Danny Mac who plays Joe Gillis captured the nation’s hearts and received overwhelming support during his incredible time on BBC1’s Strictly Come Dancing making it all the way to the final. He most recently starred as ‘Gabey’ in On The Town at Regent’s Park Open Air Theatre. His other musical theatre credits include Wicked and Legally Blonde.

Adam Pearce (playing Max Von Mayerling’), has many West End credits to his name including Les Misérables at the Queen’s Theatre, as well as the original casts of Love Never Dies at the Adelphi and The Light Princess at the National Theatre. Adam has also appeared in Evita, Joseph and the Amazing Technicolor Dreamcoat and Sweeney Todd, all at the Adelphi.

Molly Lynch (Betty Schaefer)most recently appeared in English National Opera’s Carousel at the Coliseum, where she has also appeared in Sweeney Todd. Her other credits include Fiddler on the Roof at Grange Park Opera.

One of the all-time great musicals, Andrew Lloyd Webber’s Tony Award®-winning (Best Musical, Best Original Score and Best Book of a Musical) masterpiece SUNSET BOULEVARD is a compelling story of romance and obsession, based on Billy Wilder’s legendary film, with Don Black and Christopher Hampton’s wonderful book and lyrics. This much-loved score includes the title number Sunset Boulevard, With One Look, As If We Never Said Goodbye, The Greatest Star Of All and The Perfect Yearand is performed by a full 16 piece orchestra. 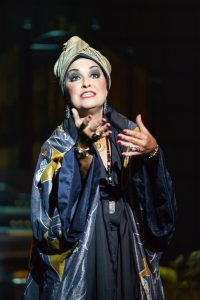 In her mansion on Sunset Boulevard, faded, silent-screen goddess, Norma Desmond, lives in a fantasy world. Impoverished screen writer, Joe Gillis, on the run from debt collectors, stumbles into her reclusive world. Persuaded to work on Norma’s ‘masterpiece’, a film script that she believes will put her back in front of the cameras, he is seduced by her and her luxurious life-style. Joe becomes entrapped in a claustrophobic world until his love for another woman leads him to try and break free with dramatic consequences.

“SUNSET BOULEVARD” is at Milton Keynes Theatre from 28 Nov – 2 Dec.

I have managed to see three different productions of Sunset Boulevard, the original London run when Petula Clarke had taken over the lead, the revival last year with Glenn Close which was semi-staged and this touring version with Ria Jones. There’s no way that Ms Jones can be considered Glenn Close’s stand in now – she IS Norma Desmond!

I spoke to Ria before the Milton Keynes run of the show and we were discussing how Norma Desmond in the show is a character that audiences need to love, hate and sympathise with in equal measures. Not an easy task for an actress, but Ria has got the balance exactly right.

Ria Jones is ably supported by a very strong cast led by Danny Mac who narrates, sings, dances, acts and manages to be a bit of “eye candy” for the ladies whilst he’s doing it!

This touring production is a BIG show! It has a big and very fine 16 piece orchestra that manages to somehow sound like a 40 piece one, it has a big set (although the sliding panels became a little tiresome, a big cast and take it from me, the show is very big on talent!

A great night out for musical fans, people that love the film industry and those of use that love a bloody good story!

“Sunset Boulevard” is at Milton Keynes Theatre from 28 Nov – 2 Dec.