Will Adamsdale and Fraser Ayres star in the World Premiere of

STUART: A LIFE BACKWARDS is at Edinburgh Fringe Festival 2013 before coming to Watford Palace Theatre on 28 – 31 August 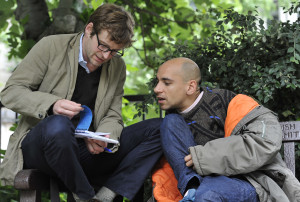 Stuart: A Life Backwards is a novel set in Cambridge that investigates the life of Stuart Shorter, a man who had been repeatedly abused and failed by society and the state throughout his life. He became a unique, attractive, but dangerous adult, who did much to campaign on the issue of homelessness. Alexander knew Stuart, and the novel is a chronicle of their relationship as a prism to Alexander exploring Stuart’s life.

Stuart: A Life Backwards will receive its world premiere on 31 July 2013 at the Underbelly’s new Topside venue at the Edinburgh Festival Fringe before touring to Watford Palace Theatre and Sheffield.

Stuart: A Life Backwards is at the Watford Palace Theatre from 28th  –  31st August