Stop Press! Sleeping Beauty wakes in 1977 as her Prince shows a real flair for invention (and real disco flares too!)! 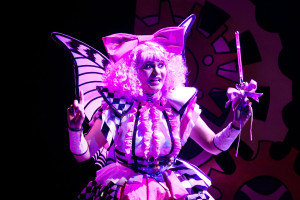 You have to hand it to Andrew Pollard, writer of this year’s hugely attractive and crowd-pleasing panto at Watford Palace Theatre. He’s as inventive as his hero Prince Alexander (Obioma Ugoala – a bit of a nosh!), who has no problem keeping up with his beloved Princess Rose (pretty and petite Jill McAusland) – he simply sets the dial of his time machine 100 years in the future and turns up just in time to wakes her with a kiss – and entrance her with his florescent yellow loon pants and disco moves – eat your heart out John Travolta! The glorious 1977 set (courtesy of designer Cleo Pettitt) does look a bit like the inside of the Tardis – and the lovely kung-fu kicking Rose would be quite feisty enough to play the Doctor’s assistant if she wasn’t a royal Princess! Terence Frisch gives us another great Dame – Donna Kebab the cook in a succession of astonishing frocks. Sheena Patel’s good Fairy Fashionista and Erica Guyatt’s bad (misunderstood?) Fairy Arachnia look stunning and give good comedy! 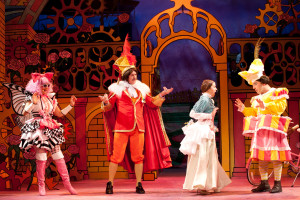 Well-meaning single parent King Calico (Walter van Dyk) and Darnit the cute dog (Oliver Longstaff) make up this small cast of just seven, who more than fill the stage with their great voices and plenty of fun and action. Many of them are returning to Watford and it shows in their lovely stage relationships – with each other and the enthusiastic young audience. But don’t take my word for it – listen to two young local critics, Freddie and Lily  right here!