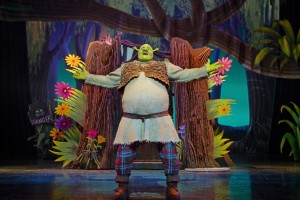 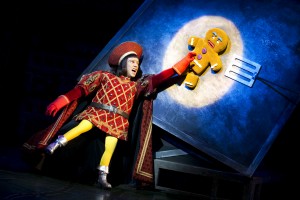 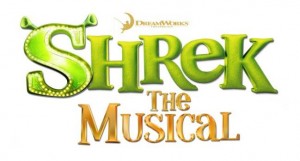 Even if the cast hadn’t been 1st class (They are, they’re great!) I would tell you to get to see Shrek the Musical at Milton Keynes Theatre purely for the design and production values alone! From the utterly brilliant costumes to the sets, the special effects (including a wonderful singing dragon) to the direction by Nigel Harman. Those things alone would make a fabulous night out for all the family. Don’t run away with the idea that this is just a show for children, I guarantee the adults of the family will laugh a lot, have sympathy for Shrek and enjoy the excellent 7 piece orchestra lead by Colm O’Regan.

I probably shouldn’t single out anyone from this talented cast, they were all just perfect, but from the moment Steffan Harri (Shrek) opens the show he’s got the audience in the palm of his hand, he’s no mean singer either. Marcus Ayton (Donkey) and Laura main (Princess Fiona) both prove that in addition to fine singing talents they both have a flair for comedy. Speaking of comedy, Samuel Holmes as Lord Farquaad absolutely tears the house down with some brilliantly funny scenes! I’m now a devoted fan of his horse “Fibreglass” – the only horse I’ve seen with a reverse gear!