Show of Hands, one of the leading forces in British folk, has reunited for a 24-date bumper autumn-winter tour of England and Wales. 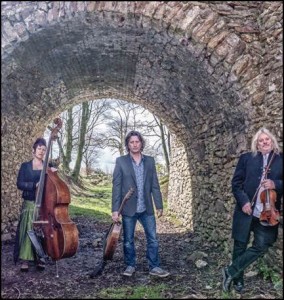 The multi award-winning, Albert Hall quadruple sell-out band (savvy singer songwriter Steve Knightley, inspired instrumentalist Phil Beer and dazzling double bassist/vocalist Miranda Sykes) will be touring together for the first time in a year when they kick off this October.

This year while Steve has pursued his popular solo Grow Your Own Gig tour of village halls, Phil has been out on the West Country waters with his Folkboat combo of sailing/music workshops as well as fulfilling a hectic programme of solo and Phil Beer Band gigs.

Meanwhile Miranda has performed scores of gigs across the country in her duo with mandolin maestro Rex Preston and Show of Hands has also been among the headliners at many summer festivals from Towersey to Sidmouth.

Recognised as leading ambassadors for roots music, Show of Hands will be unveiling music from their forthcoming, long-awaited new studio album The Long Road Home on the tour including several new numbers from the prolific pen of Steve Knightley. Due for release in January 2016, it will be their first album on the Hands On label for over three years.

After more than two decades on the road Show of Hands have forged a reputation as one of the most in-demand bands on the circuit. Says Steve: “It is strangely fitting that our three night tour finale will be at Exmouth Pavilion, about 100 yards from the folk club where we first started playing.”

“One of the great English bands”- Peter Gabriel

“Formidable operators in the roots arena. A class act.” – Independent

“The power of Knightley’s writing can no longer be denied – Colin Irwin, MOJO

“Knightley is a highly talented songwriter who has a great knack in addressing serious and pertinent issues with really catchy lyrics. Top class performances are guaranteed whichever venue they play.” – Songlines

“The classiness of the musicianship is never in doubt” – Telegraph

“The fame of the mighty Show of Hands is such that they sell out wherever they go” – Lopa Kothari, BBC Radio 3

“The duo have built up their devoted following matching Beer’s multi instrumental work with Knightley’s sturdy vocals and highly original songs about the realities of rural living”- Robin Denselow, The Guardian

Show of Hands will be at The Royal & Derngate on October 16th and The Waterside Theatre in Aylesbury on 11th November.