The Gordon Craig Theatre’s pantomime is usually the first in the area to open, as was the case with Aladdin this year starring Shaun Williamson (Barry Evans, Eastenders).

As well as being known for his dramatic and comedic performances on television, Shaun has proven himself time and time again as a talented singer and stage performer. His stage CV not only includes plenty of pantomimes and hugely successful adaptations of Porridge and The Ladykillers but also a host of musicals including Saturday Night Fever, Guys and Dolls and the Take That musical Never Forget! 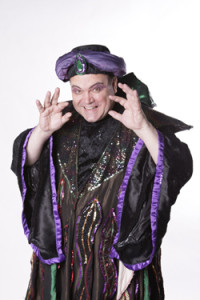 In Aladdin, Shaun will be showing us his evil side as Abanazaar – the man determined to spoil all the hero’s plans!

Regular audiences will also be pleased to learn that Dame, Paul Laidlaw returns once more as Widow Twankey. So with these two at the helm, Aladdin has more Eastern Promise than a box of Fry’s Turkish Delight!

Chris Law, actor and pantomime producer went along to see the show, he said, among other things that “this is one magic carpet ride of a show that never ceases to entertain.” If you’d like to read his full review, please click on Theatre Reviews at the top of this page.

Aladdin is at the Gordon Craig Theatre until 25th January