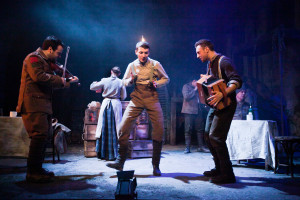 In pre-war France, young Englishman Stephen Wraysford embarks on a passionate and dangerous affair with his host’s wife, Isabelle Azaire. As civil unrest mounts and war breaks in on the idyll of his former life, Stephen finds he must now lead his men through the carnage of the Battle of the Somme and the sprawling tunnels that lie deep underground. Faced with unprecedented horror, the war-hardened Stephen clings to the shrinking memory of Isabelle as his world explodes around him. 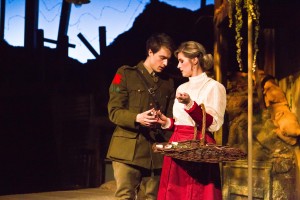 The novel Birdsong was adapted for the stage by Rachel Wagstaff and opened at the Comedy Theatre, London (2010), and more recently was a BBC 1 series (Jan 2012). This vivid and ambitious new production follows the launch of Sebastian Faulks’s latest novel A Possible Life (Sept 2012). He was appointed CBE in 2002 for services to literature.

Rachel Wagstaff comments: “Birdsong is in an incredibly powerful novel, and through the story of Faulks’s fictional characters, we can understand what it might have been like for individuals caught up in this most extraordinary period of world history.

Birdsong, is at Milton Keynes Theatre from 22nd – 27th July