From the writers, producers, creators and director of the huge success Dreamboats and Petticoats, Save the Last Dance for Me at Milton Keynes Theatre until 28 May will take you back through the ‘music and magic’ of the early 60’s, a time when each passing week brought another Rock’n’Roll classic. 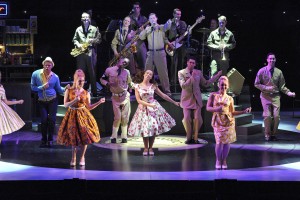 Written by Laurence Marks & Maurice Gran (of Goodnight Sweetheart, Birds of a Feather and The New Statesman fame) the show features the unmistakable music of Doc Pomus & Mort Shuman, authentically recreating the Rock ‘n’ Roll sound live on stage with hits including Sweets for my Sweet, Please Mr. Postman, Viva Las Vegas, Can’t Get Used to Losing You, the title track Save the Last Dance For Me and more. This nostalgic, feel-good journey will transport you back to music’s golden era.

Save the Last Dance for Me follows two teenage sisters through the summer of ’63 as they embark, for the first time without their parents, on a holiday to the seaside. Full of freedom and high spirits they meet a handsome young American who invites them to a dance at the local U.S. Air force base… But young love and holiday romance is never as simple as it sounds, and the sisters soon realise that while the world around them is still watching itself in black and white, life and love can be much more colourful.

The show will star Antony Costa who has previously appeared on stage in Blood Brothers and Boogie Nights He is best known as one of the members of Blue, one of the biggest British boy bands of the Noughties, who enjoyed chart success with three number one albums and 11 Top Ten singles including their debut song All Rise. 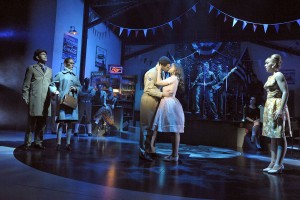 Lola Saunders, a finalist on The X Factor 2014, will make her theatrical debut in the role of Jennifer starring alongside Antony Costa as Milton, with Wayne Robinson as Curtis and Elizabeth Carter returning to the role of Marie.

Save The Last Dance For Me is at Milton Keynes Theatre from 23rd – 28th May.