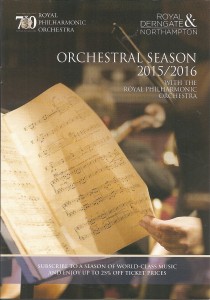 This orchestral season at the Royal & Derngate, features six concerts by its Resident Orchestra, the Royal Philharmonic Orchestra, including a rare chance to hear the Orchestra conducted in Northampton by its Artistic Director Charles Dutoit, one of today’s most sought-after conductors. A performance of Holst’s The Planets will be accompanied by a new film created by NASA, in an unmissable, multi-sensory event. This autumn also sees the tenth annual Malcolm Arnold Festival, celebrating the life and works of the prolific Northampton-born composer, with a packed programme including a performance by the BBC Concert Orchestra and culminating in a grand Gala Concert. From Tchaikovsky favourites to film-score classics and the flag-waving anthems of the Last Night of the Proms, there should be something to suit all tastes in the new season.

For full details of the orchestral season at the Royal & Derngate, please click on “Concerts & Recitals” at the top of this page. There you will find box office details and a direct link for buying tickets online.