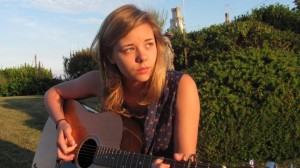 Local singer songwriter ROXY SEARLE  from Walkern in Hertfordshire. is appearing at the Hertford Corn Exchange this week.

From a very early age Roxy has been performing in TV adverts and West End shows. She won Hatfield’s got Talent at the Galleria in June 2011. With the prize that she won she recorded her first EP of her own compositions in a well-known recording studio in London. The EP was subsequently released at “Rhythms of the World” in the following July.

Her style of music is very varied and unique as she sings a combination of covers were she puts her own interpretation to them and her own stuff too. She is a self-taught guitarist that loves to perform at new venues and clubs. Take a look at her website: www.roxysearle.co.uk

Roxy will be appearing on the bill with ROB CLYDESDALE An incredible singer, songwriter and music producer.

not to be missed!