Following a three-year run in London’s West End, audiences around the country will get the chance to enjoy Rock Of Ages The Musical as it embarks on a UK tour arriving at Milton Keynes Theatre 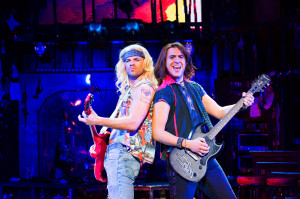 Ben Richards stars as rock god Stacee Jaxx.  Richards is best known for playing Bruno Milligan in ITV hit-television series Footballers Wives, along with roles in The Bill and Holby City, and as a regular judge on the BBC’s Strictly Dance Fever. He returns to the stage in Rock of Ages after an extensive career in London’s West End and around the UK. Previous theatre credits include Sky Masterton in Guys and Dolls (West End and UK tour), Tony Manero in Saturday Night Fever (West End and UK tour), and Jerry Lukowski in The Full Monty (West End). 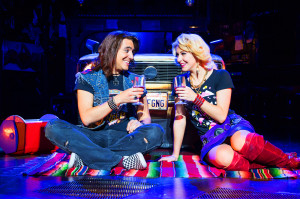 Noel Sullivan stars alongside Ben Richards as Drew Boley. Noel is currently playing Tick in the UK and Ireland tour of Priscilla Queen of the Desert and has previously starred as Galileo in We Will Rock You and Danny Zuko in Grease, both in the West End. Sullivan is also well-known as a member of the pop group Hear’Say, completing multiple arena tours with the band. On Monday night this week Noel was off so we were treated to a fine performance from his understudy Stephen Rolley. As an understudy you long for the day to come when you get the chance to show what you can do – an when it finally comes it must be the most nerve wracking time ever! But Stephen gave us a perfect and very lively performance. 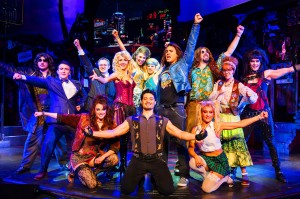 Rock Of Ages The Musical is the ultimate rock mix-tape musical, an hilarious story of dreams, love and – of course – rock. A celebration of classic 80s rock culture, the show tells the story of a small town girl and a big city rocker falling in love to the greatest songs of the decade. Featuring memorable tunes such as We Built This City, The Final Countdown, I Wanna Know What Love Is and Don’t Stop Believin’, the show brings its wild celebration of Los Angeles rock culture to the UK. The entire company quite obviously put their all into Monday’s performance, even the band were stars by the end of the evening, consequently I’m not going to single any one of them out. Every one a character and the overall effect is one which made rock fans of every one of the packed audience!

Rock of Ages has comedy, pathos, great dancing and most of all some fantastic rock tunes! Do get along to the Milton Keynes Theatre this week to see it – if you can get a ticket – and I guarantee you too will be on your feet at the end!

Rock Of Ages The Musical, written by Chris D’Arienzo, the UK Associate Director & Choreographer for this tour is Leigh Constantine, and the UK Musical Supervisor is Elliott Ware.  The excellent scenic design is by Beowulf Boritt, outrageous costume design is by Tony Award nominee Gregory Gale.

This hilarious musical is at Milton Keynes Theatre until Satuday 23rd August.