MK THEATRE tries to find out whodunnit as REHEARSAL FOR MURDER heads to town.

From the pen of the legendary award-winning writing team Richard Levinson & William Link, the creators of the mystery series Murder She Wrote and the award-winning TV detective series Columbo comes this classic ‘whodunnit’ murder mystery. Rehearsal for Murder is at Milton Keynes Theatre from 20 – 25 June. 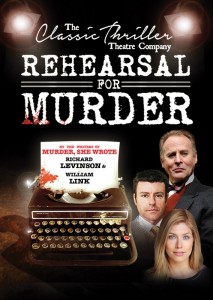 Following the phenomenal decade-long success of The Agatha Christie Theatre Company, which sold over two million tickets and continually played to packed houses across the UK, Bill Kenwright Ltd began an exciting new chapter in January 2016 with the launch of The Classic Thriller Theatre Company and its first production Rehearsal For Murder adapted for the stage by David Rogers arrive at MK on the next leg of the hit UK tour.

Playwright Alex Dennison is left heartbroken when his fiancée and leading lady Monica Welles is found dead from an apparent suicide after the opening night of her stage debut. On the anniversary of that ill-fated night, Alex assembles the same cast and crew in the same theatre, for a reading of his new play. But as the reading progresses, the play’s similarity to actual events becomes increasingly uncomfortable for the participants, and it soon becomes clear that Alex believes Monica was murdered and his new play is a devious cat-and-mouse chase to uncover her killer…

The production is directed by Roy Marsden who is best known as an actor, particularly in his role as Commander Adam Dalgliesh in ITV’s P.D. James series, which he played for 15 years. But he has also been directing plays since he was 15 years old and had two successful West End runs with Noel Coward’s Volcano and Agatha Christie’s (under the pen name Mary Westmacott) A Daughter’s a Daughter. His most recent work for Bill Kenwright was directing a UK tour of Susan Hill’s The Small Hand, the theatrical follow up to The Woman in Black.

Rehearsal for Murder is at Milton Keynes Theatre until Saturday 25th June.

An excellent choice to kick off Bill Kenwright’s new Classic Thriller Theatre Company, “Rehearsal for Murder” has all the favourite Agatha Christie tricks of the trade without the dated feel that one or two of them have nowadays.

Actors performing a play within a play must find it difficult enough being the same character both acting and for real, but in this story by Richard Levinson & William Link (adapted for the stage by David Rogers) they have to cope with a play within a play within a play! I can tell you no more for fear of spoiling it for you. I do though, thoroughly recommend this murder mystery to you – and I’d bet next week’s drink allowance that you wont guess the answer before it happens!

This very strong cast are a real team and although it would be wrong to single any one out, I must say how nice it was to see Anita Harris again (as glamourous as ever) and Mark Wynter now a much in demand actor – a long cry from his “Venus in Blue Jeans” days. Congratulations too to Alex Ferns as the playwright Alex Dennison. Onstage virtually for the entire play, Alex carried this mystery well.

My only criticism might be that due to the nature of the story there needs to be a lengthy explanation from the whole cast as to what actually happened! Having said that, I’ve no idea what details you might cut!

If you’re quick, you might get a seat, if you do I know you’ll enjoy the twists and turns of this fine story!