‘Out of Order’ by Ray Cooney at The Little Theatre, Dunstable from  14 to 22 March 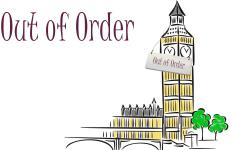 Upon discovering a dead body hanging out of the window, Willey improvises a tangled web of outright hilarious lies to protect his political reputation and the secret of his adultery with the less than able assistance of his personal secretary, George Pigden.

With a very strong local cast of Dunstable Rep members including Joe Butcher as Richard Willey, Hayley Vaughan as his secretary Jane Worthington, the hopeless assistance from George Pigden played by Anthony Bird this promises to be a night of laughter at The Little Theatre.

Winner of the 1991 Olivier Award for Comedy of the Year, Cooney’s farce is over the top, fast-paced, hilarious fun and is not to be missed!

“Out of Order” is presented by Dunstable Rep at the Little Theatre, High Street South, Dunstable from 14 – 22nd March.