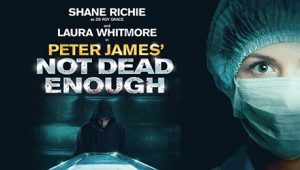 Following the huge sell-out success of The Perfect Murder and Dead Simple, the thrilling work of multi-million selling author Peter James returns to the stage with the world premiere production of Not Dead Enough.

Starring Award-winning actor Shane Richie as DS Roy Grace and Laura Whitmore, one of the stars of 2016’s Strictly Come Dancing on BBC1.

On the night Brian Bishop murdered his wife, he was sixty miles away, asleep in bed. At least that’s what he claims. But as Detective Superintendent Roy Grace continues to deal with the mysterious disappearance of his own wife, he starts to dig a little deeper into the chilling murder case and it soon becomes clear that love can be a dangerous thing…

Olivier Award winner Ian Talbot directs Not Dead Enough – the third novel in Peter James‘ award winning Roy Grace series and the third play in his box office smash hit and critically acclaimed stage franchise. Peter has been acclaimed as ‘one of the most fiendishly clever crime fiction plotters’ (Daily Mail) and his brilliant novels have sold over 17 million copies worldwide. He is the 2016 recipient of crime writing’s highest honour, the Diamond Dagger.

I went along halfway through the week and these were my thoughts:

After thoroughly enjoying The Perfect Murder and Dead Simple, both adapted for stage from the Peter James’ books, I announced on social media that I was looking forward to seeing Not Dead Enough at Milton Keynes Theatre this week. Someone messaged me back saying that this had been his favourite book and that it is a brilliant story.

Unfortunately, this adaptation from the book didn’t work quite so well onstage for me. It started well, but quickly became too easy to predict what was about to happen. Just too many obvious pointers that you could hear members of the audience whispering before the deed was done!

Having said that, Shane Richie’s performance as Detective Superintendent Roy Grace was exactly right and powerful enough to lift what was for me a fairly average performance. The set was good, split three ways between Grace’s office, the iterrogation room and the Morgue where some of the bodies had more life than one or two of the cast!

Perhaps I was in a mood that made me too hard to please, there is lots of tension, murders, bondage and intrigue so go along yourself and make your own mind up. The evening finished with the cast receiving a really enthusiastic and prolonged applause, well I can’t be right all the time!