The award-winning Noises Off, one of the funniest comedies ever written, comes to Oxford Playhouse from Wednesday 18 to Saturday 21 February, performed by students from the University of Oxford. 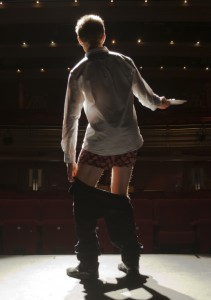 Michael Frayn has received numerous accolades for his work as a playwright and novelist, with Noises Off receiving the prestigious London Evening Standard Award for Best Comedy.  Frayn also wrote the masterfully crafted farce Alarms and Excursions and acclaimed drama Copenhagen, previously seen at the Playhouse, as well as a number of critically and commercially successful novels.

Revealing backstage turmoil and onstage bedlam, Noises Off cleverly follows the play’s shambolic blunderings from both the audience’s perspective and behind the scenes in this superbly-written farce.

Noises Off is at the Oxford Playhouse from 18-21st February