When a Dublin street busker is encouraged by a young Czech musician to give up the day job in his dad’s Hoover repair shop it turns out that it’s more than just her broken vacuum cleaner that is likely to get fixed. 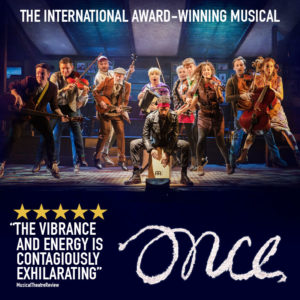 Based on the critically acclaimed 2007 Irish small budget movie, Once tells the story of two lost souls whose lives are changed over the course of five short days.

‘Girl’ meets ‘Guy’ just as he is on the verge of giving up his dream of becoming a successful singer-songwriter. Worn down by the misery of a broken heart and an infuriating excess of self-pity, the arrival of ‘Girl’, with her boundless optimism, common sense and motivation, is exactly the kick up the backside ‘Guy’ needs to recharge his batteries and restore his faith in, not only the power of music but also the power of love.

Once premiered at the New York Theatre Workshop in 2011 before transferring to Broadway in 2012. There it won eight Tony Awards including Best Musical, the Drama Desk Award for Outstanding Musical and the Grammy Award for Best Musical Theatre Album. Productions have since opened all over the world, including the West End production in 2013 which received the Olivier Award for Outstanding Achievement in Music.

Once has a Book by award-winning Irish playwright and screenwriter Enda Walsh, and Music & Lyrics by Academy Award winning Glen Hansard and Markéta Irglová who, for Falling Slowly, won the Oscar for Best Original Song.

Daniel Healy and Emma Lucia return to the roles of ‘Guy’ and ‘Girl’ after receiving critical and audience acclaim in the production’s premiere last year at the New Wolsey Theatre, Ipswich and Queen’s Theatre, Hornchurch.

Daniel is a singer-songwriter, musician and actor, who has co-written songs for multi-platinum artist Ronan Keating including the single Breathe, which topped the BBC Radio 2 Playlist. Theatre credits include Backbeat and Once, both in the West End.

Emma Lucia made her professional debut as Marilyn and understudying Carole King in the UK Tour of Beautiful, before taking on the role of ‘Girl’ in Once. 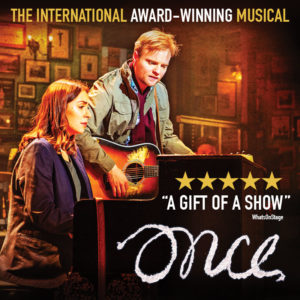 Once is directed by Peter Rowe with set and costume design by Libby Watson and musical supervision by Ben Goddard.

Ernie Almond was lucky enough to be invited to the Press night, here are his thoughts:

From the moment you walk into the auditorium at MK Theatre this week you WILL be in an Irish pub somewhere in Dublin. People are singing, dancing and playing all manner of instruments including (& especially) percussion on a wooden box. Before you know it and almost imperceptibly we are into the play proper with “Guy” (Daniel Healy) playing his guitar and singing. Its a love song and as he replaces his guitar into its case we learn that he’s giving up music. The reason for this is linked to affairs of the heart which turn out to be the backbone of this story. Along comes Czechoslovakian “Girl” (Emma Lucia) who sets out to save this poor soul – as much for the sake of his musical talent as the fact that there could be a romantic liason in the offing!

Beautifully performed by the entire cast – each one a character in their own right. I wish I had space here to describe every one of them. The music is not particularly “Irish” (apart from the pub scenes), just very effective romantic light rock. At one point the entire cast sing a cappella in such a beautiful rendition that it takes the audience a couple of seconds after it finishes to burst into applause.

If you want a frivolous, feelgood musical, wait until Mary Poppins comes round, but don’t miss Once which will intrigue you, amuse you, make you both happy and sad and most certainly make you think long after you leave the theatre.

Verdict: Not To Be Missed!