Michael Harrison thinks he has it all; great career, good friends and a beautiful fiancée. But when his stag night prank goes horribly wrong, Michael finds himself alone and staring death in the face. As time runs out and the terror grows, Detective Superintendent Roy Grace begins to fear that Michael will never be found in time.

Internationally-acclaimed and award-winning writer Peter James has gone straight in at no 1 in the Sunday Times bestseller charts seven times in the last four years with his Roy Grace series of crime thrillers.
Last year, audiences at Milton Keynes Theatre gave the author’s first stage outing, The Perfect Murder, a five star rating.
Now, Dead Simple, the second of James’ novels to be adapted for the stage, hits town with an all-star cast directed by Olivier Award winner Ian Talbot. 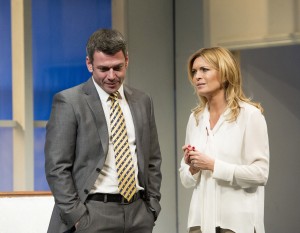 Tina Hobley returns to the stage after 12 years as ward sister Chrissie Williams in BBC 1’s Holby City as well as appearing earlier this year in Celebrity Master Chef. Tina currently presents the prime time Sunday morning programme on Smooth FM.
TV heartthrob, Jamie Lomas has, for the last year, starred in Eastenders as the murderous Jake Stone and before that played bad boy Warren Fox for five years in Channel 4’s Hollyoaks.

Gray O’Brien, the award-winning star of Coronation Street, TV series Titanic, Peak Practice and Casualty as well as Sleuth in the West End, will follow up his critically acclaimed performance in The Perfect Murder by once again playing the famous Detective Roy Grace in this gripping thriller that has all the classic suspense, twists and turns of a best-selling Peter James novel. 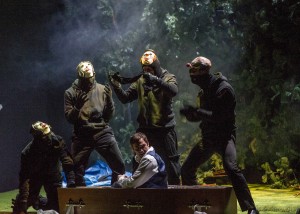 Dead Simple is at Milton Keynes Theatre until 13th June.

Having really enjoyed The Perfect Murder some months ago by the same author, I looked forward to seeing the stage adaptation by Shaun McKenna of another of Peter James’ books Dead Simple – and I have to say I was not disappointed!

Peter James has once again managed to combine suspense, drama and comedy in this fascinating story. It is gripping, coaxing you all the time to guess what the end result is going to be, but I imagine I was not the only person that got it completely wrong! The very strong cast are to be congratulated for very fine performances all round, but I do feel that newcomer to live theatre (though his television credits are numerous)  Josh Brown deserves special mention. He played the difficult role of a teenager with a learning disability with absolute conviction.

I must say no more for fear of spoiling the story, but I urge you to go and see Dead Simple this week at Milton Keynes Theatre. Whether you’re a fan of suspense dramas, whodunnits, crime novels – or just getting a bit fed up with musicals and want something to get you thinking I just know that you’ll enjoy this!

Dead Simple is at Milton Keynes Theatre until 13th June.