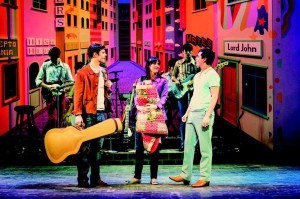 Set against the backdrop of London’s West End in the Sixties, the famous clubs, trendy fashions and eccentric characters, at a time full of hope and freedom, when the world is changing and anything seems possible.

Directed by Bob Tomson (Blood Brothers, Dreamboats and Petticoats) and designed by Matthew Wright (Evita, La Cage aux Folles), Carnaby Street tells the story of Jude, a working class boy from Liverpool, new in town and armed with nothing but his guitar and his dreams of fame and fortune. The show follows the highs and lows, the passion and heartbreak, of his journey in pursuit of stardom.

A fabulous celebration of the sixties, featuring the timeless music of The Beatles, Manfred Mann, The Animals, The Searchers, The Who and other great bands of the era. The cast includes Verity Rushworth (Emmerdale, Hairspray, and The Sound of Music) as Penny Lane, Tricia Adele-Turner (Legally Blonde, Blood Brothers, We Will Rock You) as Jane and Aaron Sidwell in the role of Jack include (Loserville – The Musical, The Prodigals -Gilded Balloon, Edinburgh).

Carnaby Street at the Alban Arena from 10th – 15th June.