Continuing its Comedy Gold season, Royal & Derngate presents the 50th anniversary production of Alan Ayckbourn’s Mr Whatnot, a wonderfully silly tale of havoc and mayhem which runs until Saturday 6 April. 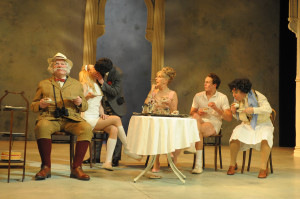 Mr Whatnot  – Ayckbourn’s first to transfer to the West End – combines a tribute to the physical comedy of the silent movie era with the very British obsessions with class, cucumber sandwiches and bed-hopping.

In this hilarious fish-out-of-water tale, a naïve but highly imaginative piano tuner is summoned to the stately home of Lord and Lady Slingsby-Craddock. A case of mistaken identity leads to an increasingly surreal series of encounters over a summer weekend of tennis matches and afternoon tea, as Mr Whatnot attempts to win the affections of their debutante daughter Amanda. Think Mr Bean goes to Downton.

Mr Whatnot is directed by the brilliant Cal McCrystal, physical comedy director for the award-winning National Theatre production, One Man, Two Guvnors. Cal is also a long-term collaborator with Spymonkey, directing their production of Cooped which was recently enjoyed by Royal & Derngate audiences.

Mr Whatnot takes to the Royal stage until Saturday 6 April, as part of Royal & Derngate’s Made In Northampton Subscription Season, significant savings are available for customers booking a package of three or more shows.

Malcolm Singer will be reviewing Mr Whatnot this week, but I can tell you that it’s not to be missed! The brilliant direction by Cal McCrystal must have pleased Alan Ayckbourn who was there to see the opening night, especially as it got a critics’ slating 50 years ago and almost made him give up writing plays – thank goodness he saw sense! Very different from almost anything we’ve seen before, maybe with feint echoes of recent productions of 39 Steps and Dick Barton – Special Agent and as many sound effects as an edition of The Goon Show. See Malcolm’s review by clicking on “Theatre Reviews” above – better still go and see the play itself!