The return of one of most popular dance productions ever staged, Matthew Bourne’s multi award-winning hit Swan Lake is thrilling audiences at the Milton Keynes Theatre until 1st February. 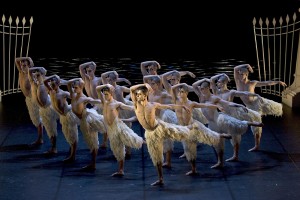 Collecting over 30 international theatre awards including three Tony Awards, Matthew Bourne’s Swan Lake has been acclaimed as a landmark achievement on the international stage. It has become the longest running ballet in the West End and Broadway and enjoyed five successful tours in the UK and thrilled audiences all over the world.

Returning to the iconic role of The Swan are two powerful leading men, Jonathan Ollivier and Chris Trenfield who have both made the role of The Swan their own. Jonathan Ollivier, a former star of Northern Ballet Theatre, was last seen as the mysterious Speight in New Adventures’ Play Without Words. Chris Trenfield recently starred as Leo in Matthew Bourne’s Sleeping Beauty, he has also played leading roles in New Adventures’ Play Without Words and Nutcracker!

The challenging role of The Prince will be played by Simon Williams, Sam Archer and, making his debut in the role, Liam Mower. Simon remains the only artist to have ever played both The Prince and The Swan in this production, and he will be doing the same again in this revival. He has just completed 12 years with Michael Clark Company, and also has a long history with New Adventures in Nutcracker!, The Car Man, and Matthew Bourne’s Christmas for Channel 4. Sam Archer has been a New Adventures leading man for over 10 years, creating the role of Edward Scissorhands, as well as leading roles in The Car Man, Play Without Words and Cinderella. Liam Mower, recently seen in Sleeping Beauty in his first Principal role as Count Lilac, was the original Olivier award-winning star of the West End’s Billy Elliot. He joined New Adventures in 2011, and, following Sleeping Beauty, joined this production this month.

The Queen will be portrayed by three of New Adventures most popular leading ladies, Madelaine Brennan, Saranne Curtin and making her debut in this role, Michela Meazza. Madelaine Brennan was last seen in this production playing, The Girlfriend. A role that she subsequently played in the 2011 3D Film for SKY Arts. She has played a wide variety of roles in New Adventures productions from Cinderella to Edward Scissorhands and Nutcracker!. Saranne Curtin is one of the most important dancers ever to have worked with New Adventures, having created the leading roles of Lana in The Car Man, Sugar in the 2012 revival and 2013 film of Nutcracker! and Glenda in Play Without Words. She was in the original cast of Swan Lake (as The Italian Princess) and comes out of retirement to once again play The Queen, a role for which she received much praise in several UK and International tours of this production. Michela Meazza, a recent nominee for the outstanding female dancer at the National Dance Awards, will be making her debut in this role. Michela is one of New Adventures foremost dancer/actors, having created the roles of Lady H in Dorian Gray and Joyce in Edward Scissorhands as well as leading roles in Play Without Words (original cast), The Car Man, Nutcracker! and Cinderella.

The popular role of The Girlfriend is played by Anjali Mehra, Kerry Biggin and Carrie Johnson. Anjeli Mehra was last seen in New Adventures’ Play Without Words and will also be dancing the role of The Queen during this revival. Kerry Biggin is one of New Adventures most experienced and versatile performers, having created the role of Kim in Edward Scissorhands and has starred in every Bourne production of the last 10 years. Carrie Johnson was last seen in Nutcracker! in 2011/12 and will also be seen as The Moth Maiden and French Princess in this revival.

Making their professional debut in this production are Tom Broderick, Reece Haydn Causton and Andrew Monaghan (all from Central School of Ballet).

Matthew Bourne says “The New Adventures Sleeping Beauty tour of the USA this Autumn has meant that we have been able to offer a substantial number of new contracts for our latest revival of Swan Lake. We are delighted to welcome 23 new company members, joining us from diverse dance backgrounds including Rambert Dance Company, Northern Ballet Theatre, Phoenix Dance Company, Michael Clark, BBC’s “So You Think You Can Dance” and the West End. The quality of this Swan Lake company is testament to how far New Adventures and our Swan Lake has come in the eighteen years since its first performance, and the Box Office records already being broken on our upcoming UK tour is proof, if proof were needed, of the British public’s continuing fascination for this much-loved production”

On the opening night at Milton Keynes Theatre the show featured Chris Trenfield as The Swan, Liam Mower as The Prince, Madelaine Brennan as The Queen and Carrie Johnson as The Girlfriend. The audience were treated to this spectacular evening of beautiful music, fabulous sets and a brilliantly talented cast with a dancing prowess matched by their first class acting from start to finish. The long standing ovation at the end of the evening proved just why Matthew Bourne’s wonderful direction fully deserves all the awards this production of the most popular ballet has already received – and those it will undoubtedly receive in the years to come!